After England spectacularly shot their way into the quarter finals this week, some of the players are likely to be eagerly awaiting cashing in on the success of the celebrations.

England player Jesse Lingard applied for four trademarks with the UK Intellectual Property Office in the weeks leading up to the 2018 World Cup. These include one for the image of his goal celebration, in which he peers through the middle of his hands making the shape of his initials and three featuring his nickname ‘JLingz’. The trademarks themselves only include replication on clothing, footwear and headgear and not the performance itself. Therefore, should another aptly named player attempt his characteristic gesture, he would have no claim against them.

Lingard’s pre-emptive application followed the likes of Gareth Bale who trademarked his famous ‘11 of Hearts’ celebration to use as a logo on a clothing brand, David Beckham who has trademarks such as ‘DB07’, ‘DB23’ and ‘BECKHAM’ and Christiano Ronaldo who trademarked ‘CR7’.

Players should however, be careful, as The International Football Association Board’s Law of the Game includes rules in regards to celebrations and provides that a player must be cautioned for certain acts. This includes excessive and/or choreographed celebrations, leaving the field, covering the head or face, provocative gestures, and also includes political, religious, advertising or personal slogans, statements or images. However, FIFA appears reluctant to reprimand players for celebrations under these rules.

In the World Cup Qualifiers Australia’s Captain Tim Cahill, as he scored in the 109th minute in extra time against Syria, celebrated by pretending to be an airplane before making a T sign with his arms in reference to ‘TripADeal’, a travel company he had signed a promotion deal with. The celebration was followed up by a post on Instagram by the company and a tag by Cahill on his own page. Tim received no caution during the match, presumably because the referee was not wise to his subtle advertisement, but was arguably in breach of a number of the ‘Laws of the Game’, including Law 4 para 5 against advertising.

This action led to some calls for changes to the rules to avoid referees being required to have knowledge of the player’s promotional endeavours in order to caution them during the game.

The World Cup 2018 has also seen Columbia’s choreographed routine, Antoine Griezamann’s Fortnite celebration and a player from Belgium kick himself in the face.

Further, Swiss players Xhaka and Shaqiri, both of Albanian heritage, celebrated in their match against Serbia by making a ‘double eagle’ gesture, which denotes a nationalist symbol associated with the Albanian Flag. Some considered that this celebration was an attempt to provoke the Serbian fans. FIFA opened proceedings against the pair under Article 54 of their Disciplinary Code, which provides that anyone who provokes the general public during a match will be suspended and fined, but concluded that neither had infringed with unsporting behaviour.

Whether they’re building a personal brand, making a statement, or simply having some fun, it is safe to say we will not get bored of imaginative celebrations, especially if they are coming after our team’s winning goals.

England player Jesse Lingard applied for four trademarks with the UK Intellectual Property Office in the weeks leading up to the 2018 World Cup. 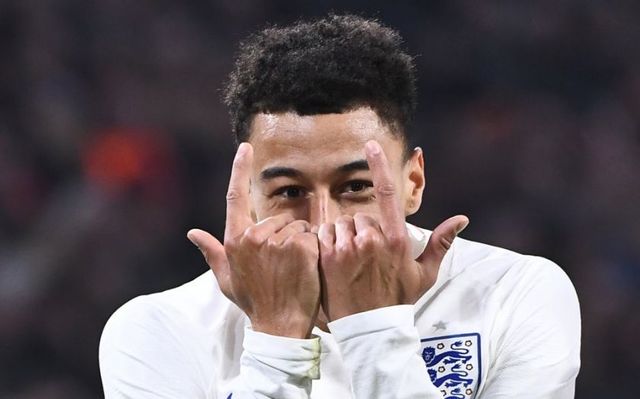